After Endings After Thoughts – She Hulk 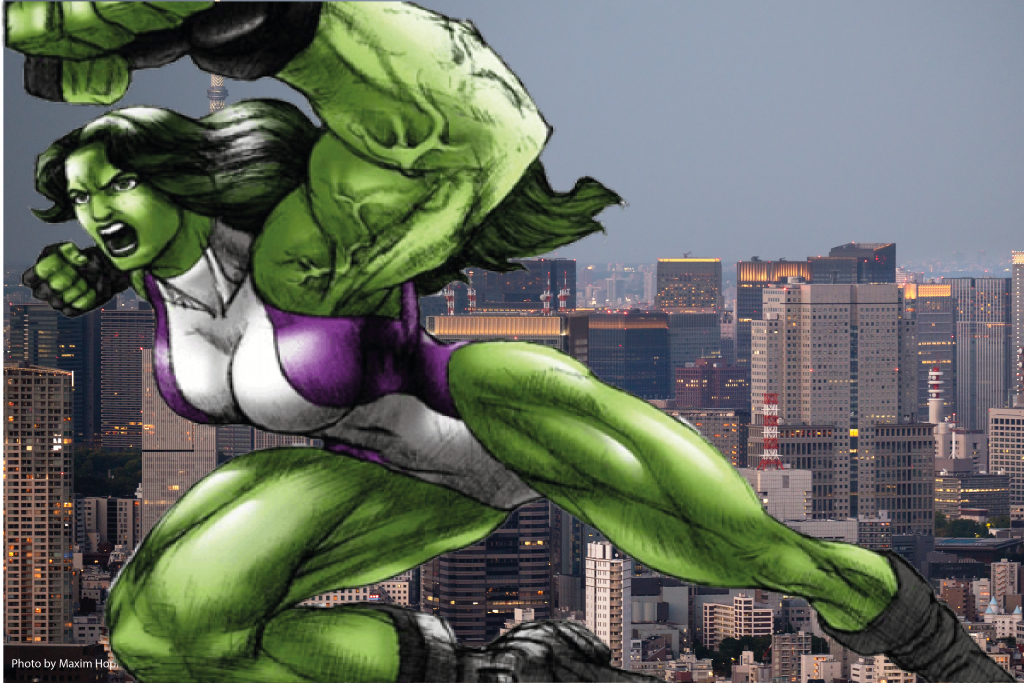 A Marvellous Show That Stumbles, Yet SMASHes its Finish…

A legal drama? Set in the MCU? Starring a Hulk? A few years ago, I’d have told you to get packing, cause that idea is not making roots. For a series of films known for their action sequences, the Marvel Cinematic Universe just didn’t seem like the place for a, slightly less action packed, super hero show…about a lawyer!

Yet, somehow, it works. Though admittedly it takes its time to get the ball rolling. It’s quite a bold creation to add to the MCU’s repertoire of stories – it’s And you know what, that’s exactly what the show wants.

She-Hulk is written and run by Jessica Gao (known for her work on Rick and Morty and famous for the much celebrated episode Pickle Rick).  Starring the fantastic Tatiana Maslany (Orphan Black, Strong) as the titular character, also known as Jennifer Walters Cousin to Bruce Banner aka The Hulk/Smart Hulk (Mark Ruffalo), Jen accidentally gains Hulk powers when a car crash causes Bruce’s radioactive blood to leak into an open wound. The result – she’s now a Hulk! But with a twist.

Unlike her cousin, Jen can actually consciously remain in control of herself when she shifts into Hulk form – an advantage Bruce doesn’t have. After a quick training montage, Jen is shown trying to live her life as if she doesn’t possess immensely powerful super-powers. As you’d expect, this all goes horribly wrong, as a courtroom battle with her soon to be nemesis Titania ( The Good Place‘s Jamela Jamil) exposes her to the world.

Soon after, Jen is recruited into working as a lawyer for a company with a superhero law division where she deals with cases from various enhanced individuals – some of these more familiar, such as her cousin’s former enemy, the now reformed Emil Blonsky, otherwise known as The Abomination (with Tim Roth returning to the role). Other less familiar faces such as Leapfrog (Brandon Stanley), Mr Immortal (David Pasquis) and Man-Bull (Nathan Hurd) also appear.

With her witty and glamorous BFF and assistant Nicky (Ginger Gonzago), the two set out to take the MCU by storm by defeating aspiring, or sometimes un-inspiring, villains, not by beating them up but via a much more savage method – taking them to court.

It would be fair to say that of the past few MCU entries, She-Hulk has been the most divisive. From a certain standpoint, Gao’s show is out to make a point. Jennifer Walters is unabashedly brash, confident, quippy and (and this will really rile up those critical male viewers) sexually active! Gasp (and with multiple partners too!).

Far more so than being a female led show about a confident woman, Jennifer (in her 4th wall breaks) is brazen and uncompromising on her position that this is a lawyer show with a Hulk, not a Hulk show that happens to be about a lawyer. And that is very much the essence of this series. It’s not about action, it’s not about a big-bad with equal power fighting back in the climatic finale episode.

This is a comedy and it sticks to its guns, even when it maybe feels like it shouldn’t (We’re all looking at you Emil, someone called the Abomination should NOT sound like a Sesame Street character). There are points when one does begin to wonder where this show fits in the broader scope of the MCU and Phase 4. It’s not quite as silly as Thor: Love and Thunder, yet not quite as serious in tone as Moon Knight. There aren’t any high stakes, there isn’t an action scene in every episode. At a certain point you might even begin to wonder if this show even takes place in the same universe as Spider-Man and Star Lord.

Yet, that could be the very strength of the show – that it is not a high stakes action packed joke fest filled with special effects that are meant to dazzle the visual cortex of the mind. It is, as it has quite often reminded us in those 4th wall breaks, a lawyer show! A half hour comedy once a week meant to entertain and relax us. Not provide us with a developing plot that culminates in an hour-long finale which mainly consists of CGI and stunt doubles getting winded.

In a period of time where television viewers are often starting the week with something heavy such as House of The Dragon and ending on Rings of Power, both of which are building towards fictional eras filled to the brim with grief and gore, She-Hulk instead provides us with a much simpler story with characters we can easily feel comfortable with, as they navigate the often sketchy, and always a little ridiculous, elements of superhero law.

If I were to say anything about this show in criticism, I would have to say that perhaps it could do with a better marketing scheme and less well-recognised guest stars (you’ll know whom I refer to). I understand that, as a mostly action-less MCU entry, and starring a woman Hulk no less, to appeal to their general fanbase, Season 1 needs to have appearances from the broader MCU to invite viewers in.

Don’t get me wrong, I love seeing some of our New York hero crowd making their limited appearances (Ruffalo was also appreciated), but this pulls away from the overall intentions of the show, causing it to falter mid-season and even lose some interest as many viewers (myself included) were simply waiting for the guest appearances we’d been teased about, all but briefly, nigh on a month before the finale.

This show is a good show. It can stand on its own two feet, and its footing is further re-enforced by its lead actor’s fantastic ability to keep us engaged even in episodes that lack the anticipated guest appearance. If given a Season 2, I would say keep guest appearances to a minimum, one at most. Also, if you were planning on watching the show but hadn’t before – do so NOW!

She-Hulk is a good example that some shows are worth bingeing. Whilst each individual episode is entertaining in and of itself, overall, I’d have probably enjoyed and engaged more with them over a single viewing than a nine week stretch.

This isn’t a perfect show but it’s far from deserving of the hate it receives. She-Hulk’s first season is entirely available for a good watch (aka BINGE) on Disney+ right now. Otherwise, this is Harvey John, signing off.