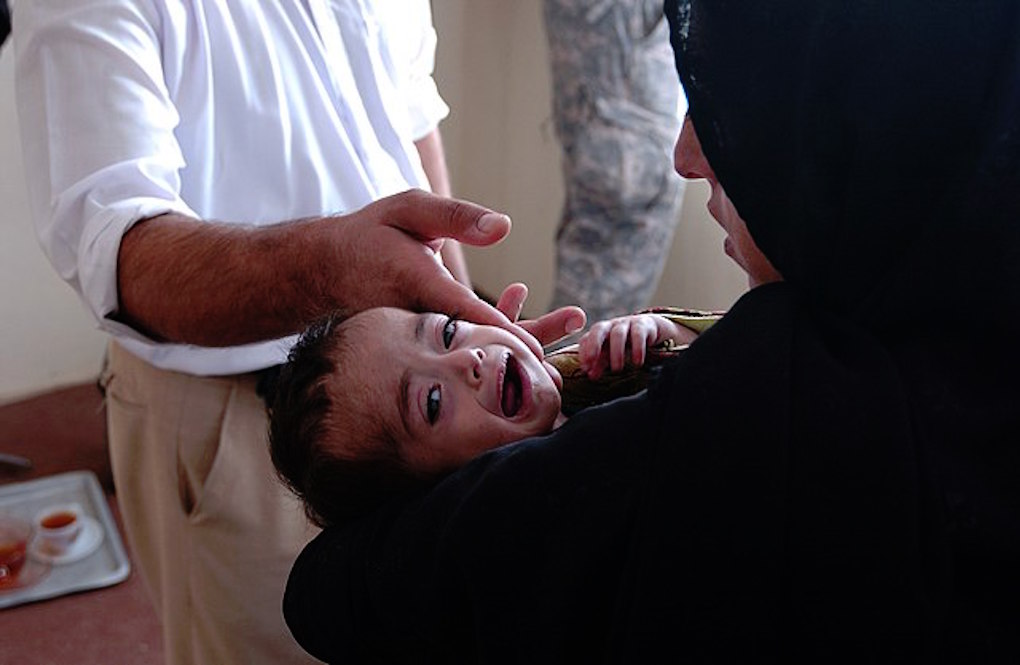 One of the 3.5 million malnourished children in Afghanistan [[File:The Pictures of Health DVIDS227408.jpg|The_Pictures_of_Health_DVIDS227408]] commons.wikimedia.org

JUST a few months ago our media was full of stories about the withdrawal of troops from Afghanistan and how the Taliban was now in control, but what we have heard little to nothing about was the international community also pulling all funding and freezing billions of dollars of Afghanistan’s assets abroad.

The consequences of this have been devastating for a country heavily reliant on foreign aid. Hospitals in the capital of Kabul are running out of vital supplies, including diesel fuel to produce oxygen for COVID-19 patients and dozens of essential drugs. Staff, unpaid for months, still show up for work while struggling to make ends meet at home.

The economy was already in trouble under the previous government, with state employees often going unpaid and last year almost half the population was living in poverty, with the situation made worse by the pandemic and a drought driving up food prices.

One hospital for more than 4 million people

All of Afghanistan’s hospitals are at crisis point, but it is most severe in Kabul’s only COVID-19 facility, the Afghan-Japan Communicable Disease Hospital, the only resource for the more than four million people who live in the capital, Kabul. Pharmacist Bilal Ahmad said more than 36 essential medications had run out and many others had expired. In three months, he said, another 55 medications will run out.

“Oxygen is a big issue for us because we can’t run the generators,” he said, noting the hospital’s production plant has not worked for months “because we can’t afford the diesel”. He also said that some of the staff are now having to sell their household furniture just to make ends meet.

“A disaster will be here”

Doctors are readying themselves for more infections with the new coronavirus variant Omicron, but, without outside help, “we are not ready for Omicron. A disaster will be here,” said Dr Shereen Agha, the 38-year-old head of the hospital’s intensive care unit.

The hospital was short of even the most basic supplies such as examination gloves, he said, and its only two ambulances have no fuel on which to run.

The previous government had contracted with a Netherlands-based aid group, HealthNet TPO, to run the hospital, but, as the contract expired in November and was financed under a fund managed by the World Bank, like most of the international community it has frozen payments to the new Taliban government.

Begging donors to save lives

HealthNet TPO programme manager Willem Reussing said the organisation is in negotiations to secure funding, “but the donor community is very reluctant to continue support and has strict conditions”.

“The healthcare system … is really on the brink of collapsing,” Reussing said. “The Afghan-Japan hospital is a dire example, where we are nearly begging donors to step in and save lives.”

22 percent of Afghanistan’s 38 million people are near the point of famine, and another 36 percent are facing acute food insecurity.

“We’re seeing the economic collapse being exponential,” UN humanitarian chief Martin Griffiths said in an interview last week with The Associated Press news agency. “It’s getting more and more dire by the week.”

Deputy Health Minister Dr Abdul Bari Omar also said last week that Afghanistan had 3.5 million malnourished children, although he made the point that the data was from the previous government.

“It didn’t happen in the last four months. Malnutrition was inherited from the previous system, but we are trying to find a solution for this problem,” he said, adding that the former administration also had failed to resolve shortages of medical equipment.

The deputy director of the children’s hospital, Mohammad Latif Baher, said the facility had seen 3,000 malnutrition cases in the last four months. Of those, 250 were hospitalised and the rest were treated at home. The hospital is running low on drug supplies, including special food supplements for malnutrition, as well as antibiotics, analgesics and anaesthetics, he said. Some supplies had come in from aid agencies, but more are desperately needed.

The Taliban government has asked the international community to ease sanctions and release Afghanistan’s assets abroad so it can pay civil servants, including doctors and teachers. However, no matter how Western leaders may preach about the need to rid the world of COVID 19 and all variants, we have seen, with their unwillingness to provide poorer countries with free vaccines while many in the UK and elsewhere are already having booster shots, that they care very little, if at all, for the well-being of the citizens of these countries.

It’s a short-sighted and ultimately harmful case of “pull up the anchor I’m on board.” If the virus is not wiped out worldwide, everybody, including those of us in the West, will be living with it for many years to come.