A short conversation about privilege 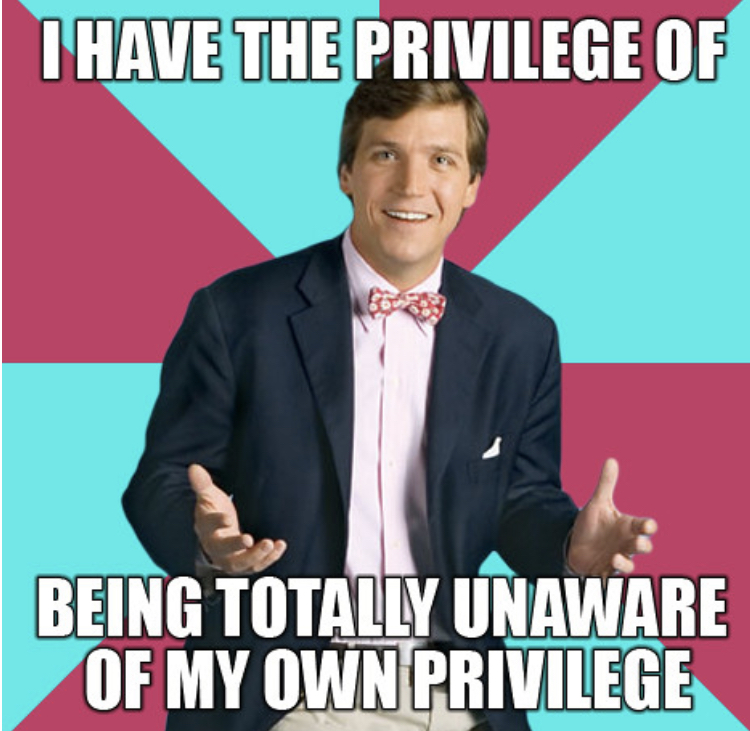 "Tucker Carlson as the Privilege Denying Dude" by jonathan mcintosh on creativecommons.org

Doing favours for friends. Helping out relations. Passing what we’ve worked so hard for on to our children…

It’s immoral because it’s selective… and selective ‘help and favour’ conflicts with human equality. It undermines our moral right not to be disadvantaged through no fault of our own. It advantages others: the ones being helped or favoured.

“Helping others can’t be immoral!” you cry, a degree of satisfaction in your voice. “You’ve gone too far this time!” …then you pause. “Or are you joking?”

You see, it’s not the ‘helping’ that’s immoral. It’s the selectivity that’s the problem.

Morality says we’re all equal. This is something I explore in my book Intelligent Ethics. Morality tells us we all deserve a level playing field right from the start; in ourselves; as human beings; as fellow creatures on this fragile coil.

A child born into poverty in a small village in Malawi or Tibet is just as human, just as important, as a child born to a president or a billionaire in Moscow or Hong Kong or New York.

Why wouldn’t they be? What moral case could possibly suggest otherwise?

We are all atoms of life.

All infants are beautiful and wonderful and equal, just for what they are, as and in themselves.

So a just society must ensure that the privilege of some doesn’t deprive others of their birthright of equality. It must prevent ‘selective helping’ from reinforcing itself, from resulting in some being rewarded at the expense of others, just because they ‘know someone’, or are part of a privileged family, a clique, a class, a caste or a tribe.

But how is this to be done?

It begins with interrupting the positive feedback loops of privilege:

“You’re living in a dream world,” you mutter. “Our society’s too riddled with privilege for anything like that to happen. Just look at how we cling to what we have… We’d never manage it.”

Ah, but you’re forgetting how clever we are.

And, here and now, right before our eyes, just let your jaw drop before the unceasing revolutions of medicine, AI, technology, genetics…

So why not this?

Why not a ‘Fairness Revolution’?

So how does wealth beget wealth?

Those already in possession of wealth can:

In the end an increasingly tiny elite grabs almost everything there is to grab, and gains ownership of most of the human world.

Which is bad for national economies; bad for society as a whole; bad for the individuals involved – and it’s not inevitable.

It can be stopped.

These effort-free wealth-generating processes can be strategically and progressively taxed to prevent them reinforcing privilege and accelerating wealth; while subversion and monopolisation can be ruled out by law.

And it’s the moral thing to do.

Through the inheritance of wealth and power opportunity is granted to some and, as a result, limited for others. This process is a driver behind class, caste, elitism and hierarchy-by-lineage all across the world.

But it’s easy to stop.

A ‘Future Generations Fund’, raised through this taxation, can share the wealth of each generation fairly with those that follow.

It’s the opposite of what’s happening now – but it’s precisely what we need.

But again it’s easy to fix.

A moral society will provide EVERYONE with a good education, using well-resourced training, data and apps to ensure education is adaptive to the potential of each child.

We landed on the moon…

We wiped out smallpox…

With the will, just about anything we want to do is possible.

Individual effort, prowess and skill are wonderful things. We should honour them. We should celebrate great achievement and success.

Let’s not reinforce privilege by rewarding those already privileged with more of the same.

So we have to break the reinforcement cycles of privilege. It won’t impoverish us: it’ll make humanity wealthier. When we know the system’s fair we feel more content, we work harder, we’re more creative, we’re more productive and engaged.

Breaking the reinforcement cycles of privilege will make us all happier. Fairness does that. It will make our society better able to cope with the challenges of the future: economic upheaval, pandemics, climate change.

It will make each and every one of us more resilient, and all of us safer.

This article comes from his Luke Andreski’s new 2020 book, Short Conversations: During the Plague.

Luke’s new book, Short Conversations: During the Storm, is out now.