A drive for peace? 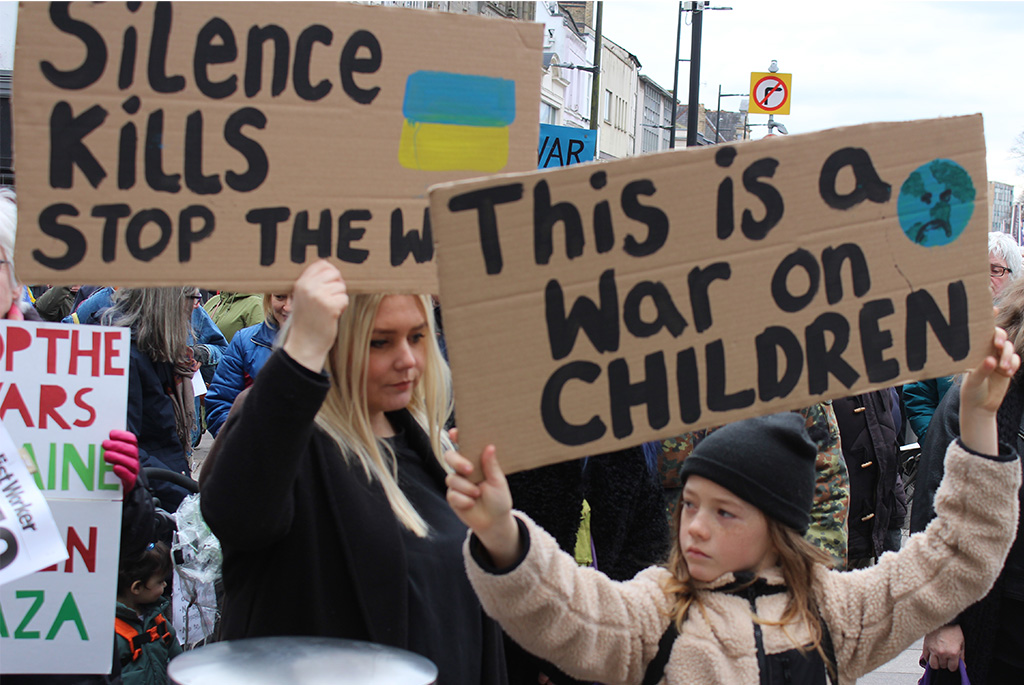 AS the UK media goes into propaganda overdrive against the ‘monstrous’ Russians led by ‘evil dictator’ Vladimir Putin, thousands marched calling for an end to war. This in the face of a media which seems intent on ramping up the anti-Russian sentiment in order to justify sending British troops into what could only be seen as a modern day ‘Charge of the Light Brigade’.

As the Sunday papers ensured their readers knew that there was a good and a bad side in this conflict, in London, Edinburgh, Cardiff, Manchester, Colchester and all points in-between people rallied both to support the beleagured Ukrainians and to call for peace.

Globally there were Stop The War rallies across Europe with over 40,000 people taking part in a demo in Zurich. In Rome banners read ‘No Base, No Soldier, Italy Out Of NATO’ expressing a real fear that NATO might be softening up public opinion prior to launching a strike against the Russians. Over a thousand people rallied in the Croatian capital of Zagreb, itself the scene of fighting not too long ago, under the banner ‘Stop The War, Save Europe’.

In St Petersburg activists opposed to the war continue to face arrest and police harassment for standing up to Putin and standing for peace.

Perhaps the most worrying aspect of the demos in the UK was the absence of any Labour Party involvement. Long-time Stop The War Coalition supporters Diane Abbott and John McDonnell withdrew from the rally in Trafalgar Square, – addressed by Jeremy Corbyn, Lindsey German and Kate Hudson amongst others – after the party labelled Stop The War ‘anti-NATO’.

This act of political cowardice on the part of the so-called Socialist Campaign Group of MPs follows their refusal to support Jeremy Corbyn after he was suspended from the party under the most spurious of excuses. That Corbyn remains more popular than the current Labour leader explains why the party is distancing itself from anything he believed in.

There is little doubt that the media in most of Europe regards Ukraine as the innocent victims of Russia, which to a large extent they are. But, as Critical Mass has been pointing out, whilst Russia had no right to invade it was subject to extreme provocation by a NATO which continued to expand despite warnings that this would result in a military reaction from Moscow.

As the war intensifies the chance of getting a balanced view of what is happening in the national media, and let’s be honest most people still rely primarily on the BBC for news, will diminish. Which, given the overt racism in the coverage so far, is going to make making the case for peace much harder.

Many Britons, indeed many Europeans, are fully supportive of taking military action to support Ukraine who they are told are entirely innocent in all this. All of this, for a media unwilling to consider that NATO might be in any way responsible for what is happening, points toward an escalation of the war. Not because that is what Russia desires but it is, seemingly, what some in America and Europe desire.

According to Peace in Ukraine

Our coalition, initiated by the Campaign for Nuclear Disarmament, CODEPINK, No to NATO and Stop the War, is now supported by local, national and international groups across four continents. More than 120 cities participated in our Global Day of Action on March 6, with 30 events preceding the Sunday rallies, and we are calling for ongoing demonstrations against the war. We need a massive, unified response by peace-loving people around the world to say No to War in Ukraine; Yes to Negotiations and Peace. Join us!

One thought on “A drive for peace?”