Whatever happened to the Tory Party 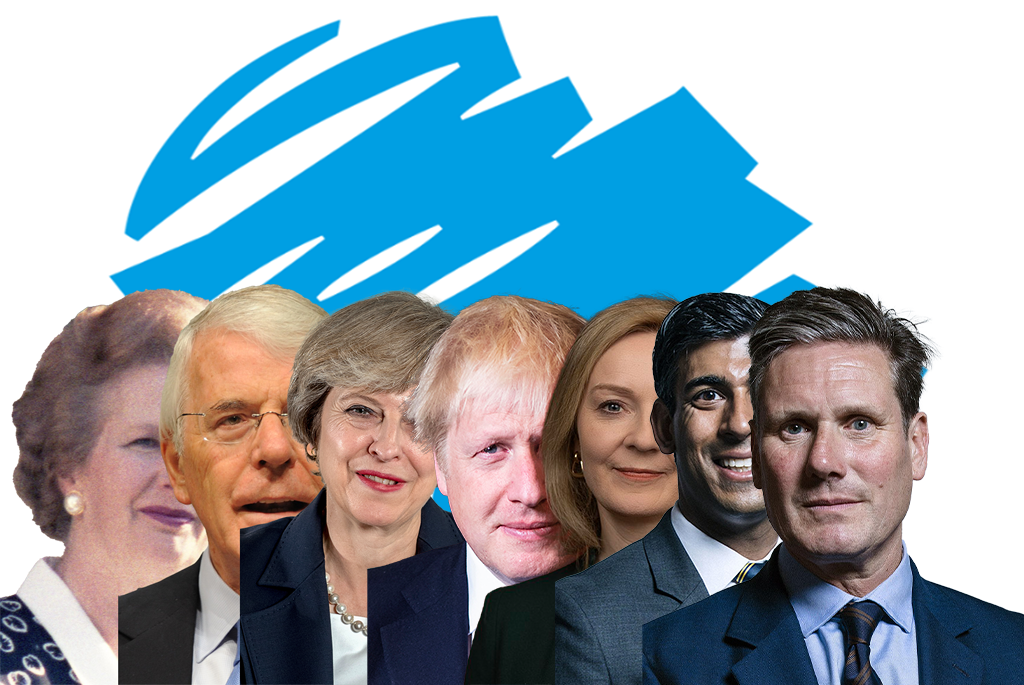 THERE used to be a TV show called ‘Whatever Happened to the Likely Lads?’. It starred James Bolam and Rodney Bewes and, although it is doubtful it would have weathered well, I remember thinking it was rather funny. The thought occurred to me as I was pondering the mess the Conservative Party have managed to manufacture for themselves. I can see a Panorama Special in 10 or 15 years time titled, ‘Whatever happened to the Tory Party?’ This will be at a time when Sir Keir Starmer will be enjoying his third term in office, and people on Labour’s left, if they haven’t been expelled, will be saying, “We know he hasn’t lifted the restrictions on strikes but give him time”, or “We know there are still millions in poverty but Lady Reeves of Leeds has helped restore business confidence,” whilst the official government line on climate change will be, “We just have to learn to live with it”. But that’s for another day. What is happening now?

In December 2019 Boris Johnson presided over a near record victory for the Tories, securing a majority of 80 seats and winning their highest vote share since 1979. Fast forward three years. Johnson was ousted by a backbench revolt. Liz Truss has had to fire her Chancellor after he spent just 38 days in the job and then has resigned after just 44 days as PM. Opinion polls put the Tory vote share at under 20% (it could well be under 10% by the time you read this) and Labour are heading for their biggest victory ever, despite having a leader with zero charisma and even less in the radical policies department. What went wrong?

We should be clear about one thing. Nothing that has happened has been the result of anything the opposition parties have done. None of the parties opposing the Tories have a credible, or, more importantly, popular plan which has voters flocking to them. Indeed, had the Tories just kept their heads down, they could well have been on their way to a victory in 2024.

On the other hand, the Johnson Government had to deal with two major events that could not be entirely blamed on them. COVID and a world recession. To be fair, any government would have found these a challenge, but the Tories gave the appearance of not caring much about the first and seeing the second as simply an opportunity to cash in.

When it became obvious that COVID was a pandemic affecting every country in the world, Johnson’s Government prevaricated and promoted the idea of herd immunity, ignored the advice of scientists, gave money to companies that either never existed or had links to Tory MPs and, in an act of unbelievable insensitivity, held parties attended by ministers whilst telling the public that they could not even attend the funerals of loved ones who had died from the virus. As a result the UK has one of the highest death rates amongst the G20 nations. The loss of public confidence though was less a consequence of the death rate (people seem not to mind if people are dying so long as they are not their relatives) than the fact that politicians were not being forced to abide by the same rules as they were.

It is easy to forget, as we are now looking at the death throes of undoubtedly the most ineffectual Prime Minister in living memory, just how shambolic Johnson’s reign as PM actually was. He often gave the impression of being totally out of his depth. Whereas his mussed hair and line in quips had endeared him to the public when he was a celebrity politician on shows such as Have I Got News For You, the public expect their Prime Ministers to, at least, give the appearance of knowing what they are doing. That said, Labour’s right preferred a serial liar to Jeremy Corbyn. And, if rumours are true, Johnson is planning a spectacular return in the wake of Truss’s diastrous mini-break as Tory leader.

Tories have short memories so let us remind them that as a succession of mini scandals dogged his Government, so that even his most slavish devotees in the press had no option but to report them, Johnson’s favourability ratings plummeted. From a positive net rating in April/May 2021, by January 2022 he had the support of just 36% of the public. It’s worth pointing out here that Starmer’s net rating was not much better. When asked by Ipsos-MORI whether they would be a good or bad Prime Minister, whilst only 21% were positive about Johnson, Starmer managed only 25%.

Although COVID dominated the early part of Johnson’s premiership, there has been a deepening world recession caused largely by a lack of confidence amongst investors that has really put the knife into the Tory body politic. Of course, the Tories are not responsible for a world recession, but they are responsible for pushing through a Brexit that increased costs to British businesses, took key workers out of our economy, and ensured that we cut off important supply lines without establishing alternatives. Truss’s claim that we can ’enjoy’ the ’freedom’ of Brexit shows how divorced the Tory Brexiteers are from reality. Penny Mordaunt, a Tory right favourite, had her opportunity to secure a good deal for the UK, but could barely be bothered to turn up to meetings and when she did had not prepared.

Most countries in the G20 are facing rising inflation caused, in the main, by large multinational companies demanding an ever greater share of the cake for their shareholders. Prices have been forced to rise, not because of wages which, in most sectors, are still at 2008 levels, as dividends have increased. But economic incompetence by the UK Government has made sure our economy is suffering more than most.

The fight back against the  recession and profiteering from large companies, particularly energy companies, has been mostly centred on national solutions. The Tories have ummed and ah’d and been indecisive whilst they ignored the bigger picture and spent their summer infighting. Liz Truss, quite simply, had neither the intellectual capacity nor political instinct for the office she found herself in, albeit fleetingly. Kwasi Kwarteng was the sacrificial lamb following an ideologically motivated mini-budget which sent the pound plummeting. But his sacrificial slaughter was not a reaction to his trickle down myth which was putting money into the hands of the rich whilst making the poor poorer, it was straightforwardly a means to buy time from the IMF and the international money markets. Like so much of recent Tory performance it failed miserably.

Plenty of people will point out that there is something decidedly undemocratic about 172,000 Conservative Party members deciding the next Prime Minister. I’m not sure it is. When Gordon Brown became Prime Minister in 2008 he was simply anointed by Blair. The point is we do not have a President and the Prime Minister is the leader of the party that holds a majority. Nevertheless the policies that person implements should have been subject to debate in a general election. Truss simply pulled her favourite right-wing nonsense out of her back pocket written on an envelope and proceeded to send the British economy into meltdown. That is profoundly undemocratic. Her successor could well be selected by 100 Tory MPs but whoever it is, and no matter how they get there, they will pretend that the manifesto they were elected on was just for the election and represents no contract with the electorate.

The fact is that it was not 172,000 Conservative members who were dictating policy, it was/is the entirely unelected IMF and the even less visible money markets. At no time since Truss set the disastrous course she has put the UK on has anybody stopped to ask: how does this affect the least well-off in our society? And, when I say nobody, I mean politicians or other members of the elite. The fact is that the problem is not which party gets into office but that, in order to stay there, they must appease the money markets and their cheerleader, the IMF. That strikes me as profoundly undemocratic.

The slight correction in the course announced by Jeremy Hunt is not one which puts money into the hands of ordinary people. It is one, dictated by the IMF, which will see cuts in public expenditure, real term cuts in benefits and pensions, and an ever shrinking public sector. This translated means fewer teachers, fewer nurses, lower wages across the public sector. And, yes, more money for the already super-rich as the Tories post-Brexit dream of turning the UK into a tax haven becomes a reality.

Is there an alternative? There always is, but not in the policies being pursued by many on the so-called ‘left’. Proportional representation will not stop the dominance of the IMF, MMT will not be the saviour of the public sector, because the money markets will simply crash the pound in response, universal income will not insure the poor against inflation because, like minimum wages, they are in the gift of governments who are there to do the bidding of the IMF and the money markets. We need a radical and very deep overhaul of the way our society operates, not just in one country, though we have to start somewhere, but worldwide. Until we break the obsession with ever more growth and more and more profits and our reliance on the confidence of a tiny minority of investors, then nothing can change. Change will probably not come through parliament because, whichever party is in power, there is an unwritten and unspoken rule which means the stability of the markets will always take precedence over the suffering of the victims of the policies every government, left, right or centre, has to pursue.

Our best hope for genuine change lies in the hands of ordinary people seeing through a system in which the rich always win and deciding to act collectively to enact policies that satisfy the needs of many rather than the greed of the few. And for those who think the slow death of the Tory Party is to be celebrated take a good look at the Labour Party. Its policies are designed to appeal to Tory voters and, more importantly, to appease the markets. Rather than fall foul of the IMF, Labour’s oft-touted competence will be to show that given the keys to the shop they can be trusted to turn a profit. That means creating an environment that is good for investors regardless of whether it is good for the poorest in society. It means more patriotism, harsher rules for would-be immigrants, a hostile environment for claimants, no favours for trade unions (forget what Starmer promised the TUC, that will not be a priority). Fiscal responsibility will become the new catchphrase and all blamed on the fact that the Tories have, to cite a New Labour joke on leaving office, spent all the money. Perhaps the best response to the question ‘Whatever happened to the Tory Party?’ is that it morphed slowly, and steadily, into the Labour Party.