A short conversation about cooperation 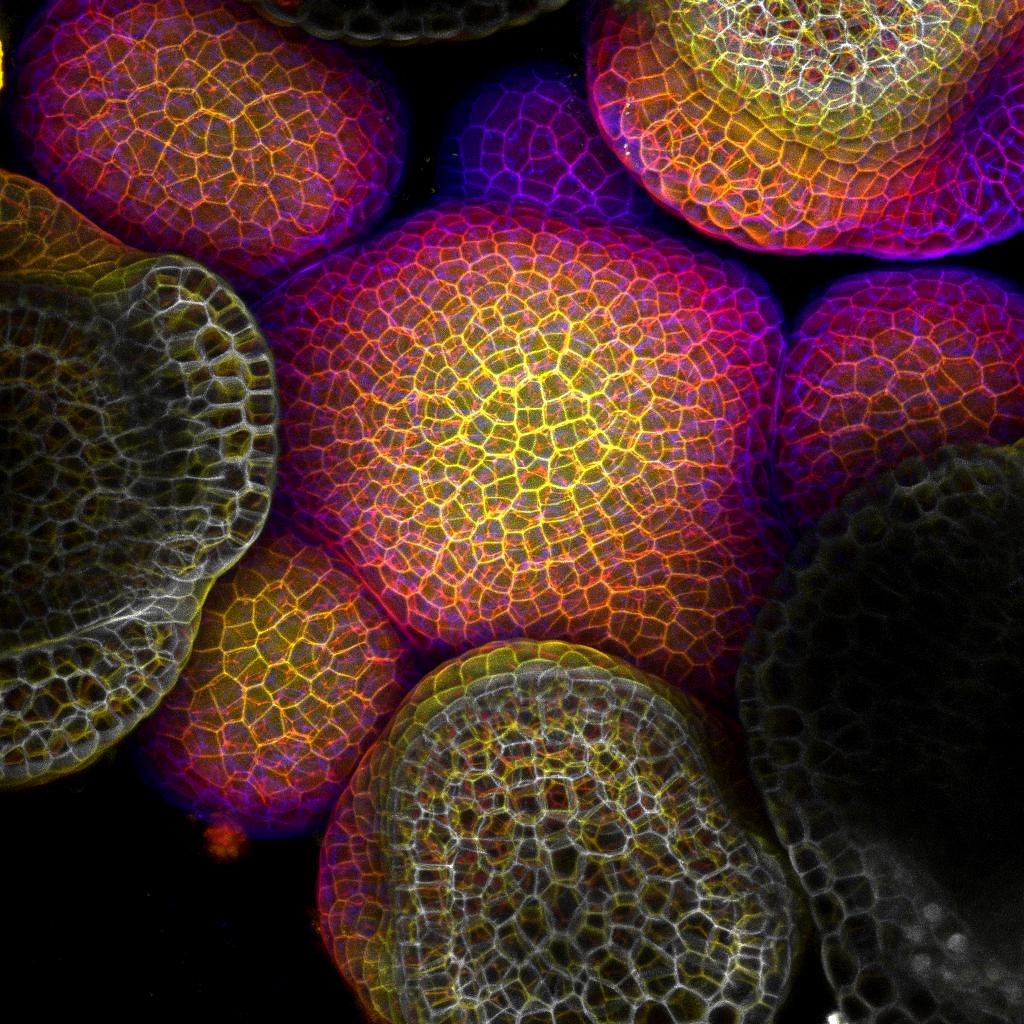 "Flower-forming cells in a small plant related to cabbage" by ZEISS Microscopy is licensed under CC BY-NC-ND 2.0

Some folk think it’s all about competition – survival of the fittest in a dog eat dog world – natural selection picking out the strong, weeding out the weak.

It’s how Nature works, they believe. A ‘Law of Nature’. Then they decide it’s a Law of Society, too.

It’s impossible to overstate how wrong they are.

And, more than that, because such beliefs are a first step towards the uncaring dismissal of other people’s needs, they’re dangerously wrong.

Because, if you take a little time to consider, you’ll come to see that cooperation is at the heart of all life, and competition just a side-show.

Cooperation is everywhere. It’s there when you look in the mirror. It’s everywhere in the biological world. It resounds in the pulsing of your blood…

Cooperation is nature’s beating heart. Nothing works without it.

I’ve got another 37trillion.

Each of us has over four thousand times as many cells in our bodies as there are humans on the Earth. And here’s the important thing. They cooperate, all those cells in the human body.

If they didn’t, we’d be jelly.

Every multi-celled organism is a cooperative endeavour. If the cells in our bodies went into competition, we’d all be f***ed.

Even the smallest of creatures cooperate. Bacteria cooperate. Given certain conditions they selflessly act to enrich their environment for other bacteria. They swap genes. They divide to create more bacteria – with no immediate or guaranteed gain to the former individual self.

And it goes down to a lower level even than this. The complexity found in bacteria and many other single-celled lifeforms – organelles, nuclei, RNA or DNA – result from cooperation. It is now widely recognised that the more complex single-celled microbes achieved complexity through symbiosis – through uniting with other cells to become a cooperative and ultimately highly integrated assemblage of parts.

An act of selflessness

Having offspring in any species and ensuring their survival is an act of selfless cooperation, with no guarantee of future benefit for the parent organisms. Just think – if we failed in this selflessness, there’d be nobody left!

Individual selflessness is found throughout nature, where individuals act in ways that benefit their herd/hive/swarm/flock more than themselves.

“It’s the genes, then, that are selfish,” you suggest. “Perhaps the selfless individual is just an expendable component in the selfish existence of the genes?”

I dislike selfish genes. More than that, I don’t really believe in them. What are they, after all? They’re not life. They have no agency – not by themselves. They have no more motive than an inert list of words, or a computer programme printed on paper. They merely encode patterns. They are passive devices for passing information down generations. Only when genes are embodied in the individual do they gain agency… and individuals with agency cooperate.

Life uses genes. It’s not the other way around. The continuity of genes – or, more precisely, the continuity of the information they hold – is purely a result of their usefulness. If genes were not useful to living organisms they would not exist.

Economic competition is sustained by economic cooperation: by agreements, rules and laws.

Selfishness and private greed – sustained by the ideology of competition – in fact stifle competition, depriving the economic cycle of hoarded wealth.

Private greed is the enemy of both cooperation and the cooperative impulse: the rich are less charitable than the poor. Cooperation, a sense of fairness, generosity and compassion are natural human traits – and they are traits which the modern world needs to encourage rather than peripheralise or suppress.

Even language is a cooperative construct. We would have no words, no poetry or literature without the cooperative act of establishing meaning. Our minds are products of cooperative interaction with others. Sentience is a group activity. ‘Others’ define us and help us make sense of our world.

So it is a misinterpretation of nature to highlight competition above all things. The notion that competition is the basis of life or society is an erroneous ideology, encouraged by elites who enjoy the centralisation of power and wealth which ruthless competition brings about. Even the ideology of competition could not exist without cooperation. Society, science, technology, language and the creation of ideologies are all cooperative acts.

We need each other. We are all in the same boat. Competition is the smaller part of what we can offer one another and our society. Cooperation is the builder of our world – our greatest and most valuable skill. Cooperation has given us medicine, space flight, the internet, SatNav, smart phones, immense cities sustaining vast numbers of cooperating individuals, an incredible technological civilisation…

Think of what we have already achieved.

Think of what we have yet to achieve – together.

Luke Andreski is a founding member of the @EthicalRenewal and Ethical Intelligence collectives. This article comes from his 2020 book, Short Conversations: During the Plague.

His new book, Short Conversations: During the Storm, is out now.