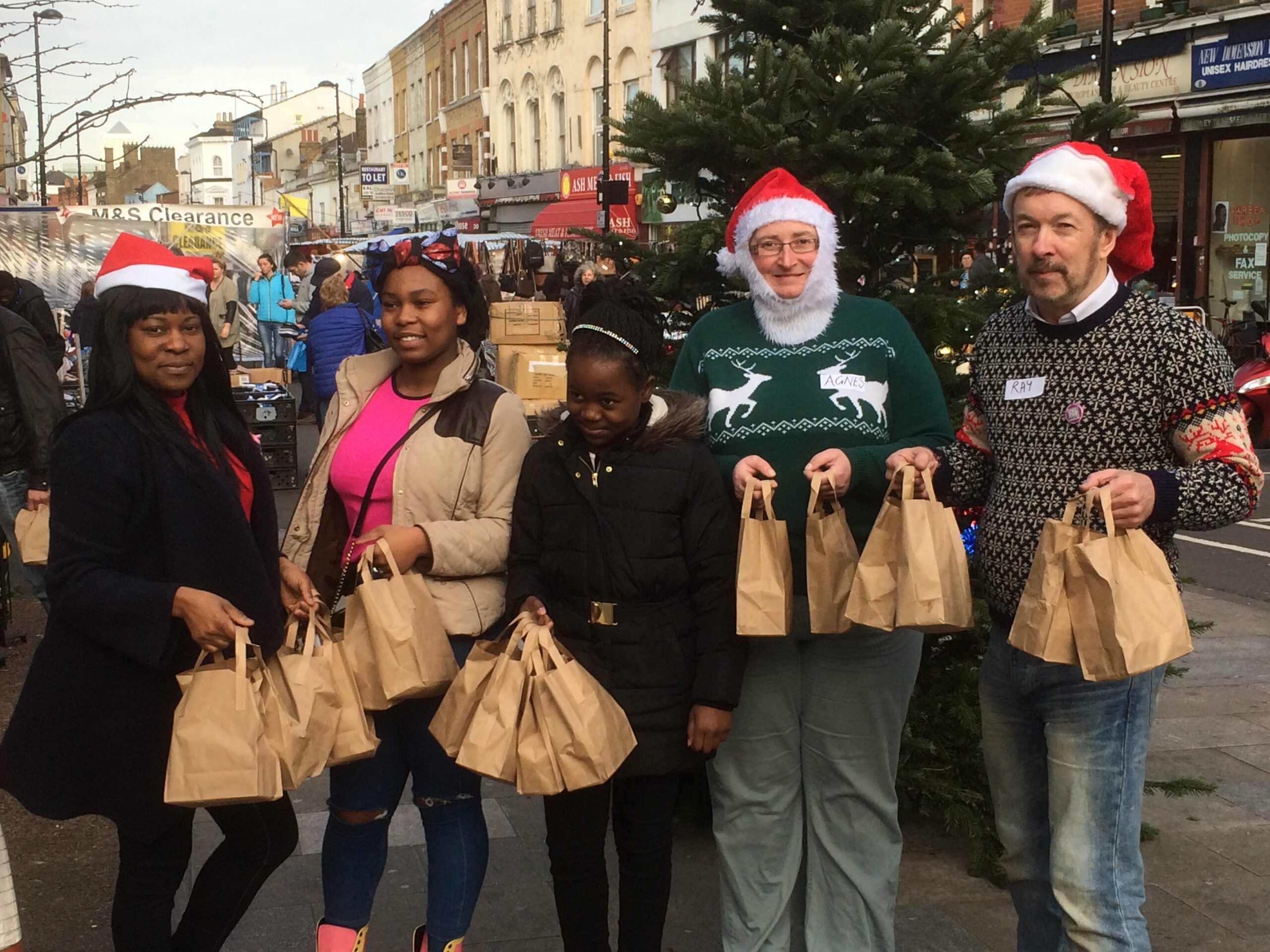 The We Care team offering kindness at Christmas. Photo courtesy of Ray Woolford

FOR many of us who run independent food banks, the way the mainstream media portray us as operating is far removed from our reality. At the We Care Food Bank in Deptford, South East London, the request for emergency food, be it from the NHS, Social Services, refugee and charity groups, is just the beginning of our work to ensure everyone who comes through our doors is able to select not just food which their dietary health and faith dictate, but also to have questions put to them about their situation and what type of food is best suited.

Questions such as: Do you have a microwave, a cooker, a fridge?  And what can we do to help resolve the crisis which has led you to seek help from our foodbank? Vital questions and ones which, when answered, help us to help others.

So it’s with great pride that we can announce that the five tons of food we gave away this year and the five thousand people a month we fed during Covid lockdown, without getting a single penny from the Government or our local council, was made possible thanks to the kindness of volunteers.

Here are just some examples of that kindness and who the recipients are:

(All names have been replaced for privacy but all stories are true.)

Gary, a homeless man, came to us after having been given a pair of new walking shoes but no socks. The boots were rubbing and chafing against his bare feet whilst he trudged the streets. We bathed his feet, bandaged them and then gave him a pair of London landmark socks we had been selling in our charity shop. Two days later he returned with a scrap of paper on which he had drawn a heart and written thank you in nine languages. We set him up with a vegan roll and a mug of tea and then off he went to Croydon where the word was out a shelter might take him.

Alice had spent 27 years living on London streets. She had no drug or alcohol issues, just years of suffering from domestic violence and depression which had made the streets seem the safest option. Being taken off the streets as part of the Covid homeless project, she had been given a key for a flat near our Community Hub in Deptford with zero support and not one piece of information about how or where she could get help. It was to our Kath’s Place Community Hub that she finally arrived, exhausted and lost. We promptly gave her new clothes from our charity shop, food, and put the shout out for furniture, fridge and microwave. Within 48 hours we had helped her create a real home, and her water, council tax and utilities all sorted by our volunteers. Seven days later Alice arrived in her new clothes with a smile that could outshine Blackpool and a style which made her look like Mica Parish.

Barry had also been homeless, but now, thanks to Covid, he was given his own studio flat. He looked dapper as he arrived at our door, as so many do, coming in full of curiosity. However, sensing as we do that something was not quite right, we asked if he would help us out and take away some surplus food we had, as not everyone is brave enough to ask for help from a food bank. Filling his bag with fresh fruit and vegetables, we sent him on his way. Moments later he returned crying, and naturally we thought the worst, but we slowly learned the reason for his tears. Only the day before he had been walking around the streets by his new home and had found a slow cooker; he had always wanted one, but being homeless had no real reason to have one. Now however, with his new flat, he had his slow cooker, and when he found it he thought to himself how great it was and that when he had some money he would be able to buy some vegetables to cook in it, so, when he left our Community Hub and the carrots popped up through his bag, the moment had simply overwhelmed him.

With so many having to shield and families unable to travel to help the elderly and the disabled, with social services being almost non-existent, we established a buddy system, inspired by the Aids buddy system of the 80s, whereby we matched volunteers to a ‘buddy’, thus creating hundreds of bubbles across seven boroughs. This involves volunteers shopping for meds, checking everyone is okay and delivering food, conversation and company every week to help tackle mental health problems.

We started giving everyone with a food parcel a Spider plant. “Why?” some people asked, “Why not give them tomato plants?” Well a Spider plant grows fast, offers hope, and even, when you forget to water it, carries on growing. Families with children, as well as the elderly living alone, found these plants as comforting as the food and conversation we delivered.

We put out a shout across Twitter asking for anyone with film experience to help film our work and, thanks to furlough, we had the pick of the crop. The short film ‘Feeding Lewisham’ which we made, has won awards all over the world as well as giving people across the globe a model of community help and solidarity they could copy.

With people only allowed out briefly, we created The Deptford Shelf, a space on which we would put surplus food to help anyone access healthy food options for free. We started with a table, but the Lewisham Council would only allow us to put out a table if we bought a traders’ licence, and we simply did not have the cash to buy a traders’ license to give free food away, so we built a shelf on our wall instead. Problem solved.

Our building, Kath’s Place, is named after the most important UK civil rights activist in 100 years, Kath Duncan, and during lockdown we had been filming ‘Liberty’, the story of Kath Duncan’s role in establishing the civil rights movement in 1930s Britain. The night before, Toni Ann Gurdon who manages the project as a volunteer and, due to her own health issues rarely sleeps, had taken a call from one of our clients who had called us to leave her will with us before ending her life. Thanks to Toni picking up that call at 11 pm that life was saved and turned around.

With children growing so fast, we set up a swap rail for kids’ coats,so, instead of buying new coats, we encourage parents to come to Kath’s Place and swap the coat for free.

We give all our parents with babies Bamboo nappies which we also sell at £5, they have pop buttons, are easy to clean for mums in hostels, refugee camps, or temporary housing, and grow with the baby so you only need two, doing zero damage to the planet whilst saving parents the £800-£2000 they would spend on climate-damaging disposable nappies.

We agreed to work with the Felix Food Charity to create a community kitchen project in their kitchen as we still have not raised the cash we need to build our own community kitchen. It will allow people who love to cook, but who may be homeless, in temporary housing, or refugees, to come together as one community and eat and cook together while making friends and cooking healthy family food to take home for friends, families, and neighbours, all done with the surplus of goods sold through our Community Cafe at Kath’s Place.

We won the award for services to the people of Lewisham from the Mayor after we pointed out that the council information being sent out had no phone number and with Covid lockdown people without a smartphone or internet access could not get help. Today all Council literature carries a phone number.

This Christmas we just ask you to support your local independent food banks and charities like ours who do extraordinary work at grassroots level with no Government or council funding whatsoever. Below is the link to our Christmas GoFundMe appeal, or you can google Lewisham Community Lottery and choose We Care as your chosen Charity. It costs only £1 and you get the chance to win £25,000 – perfect for those with not a lot to donate.

It costs We Care £25,000 a year to run this community project. We pay £12,000 in rent, then there is gas, electric, water, insurance, and membership of the different organisations which get us access to cheap food networks. We are all volunteers, and this project, which gets referrals from Social Services, NHS, GPs, schools, refugee groups, Covid support networks etc, gets no council or Government funding. Every penny is raised through community charity shop and the kindness of strangers who donate through our GoFundMe page. https://www.gofundme.com/f/corona-virus-community-support-network

One thought on “12 days of kindness”